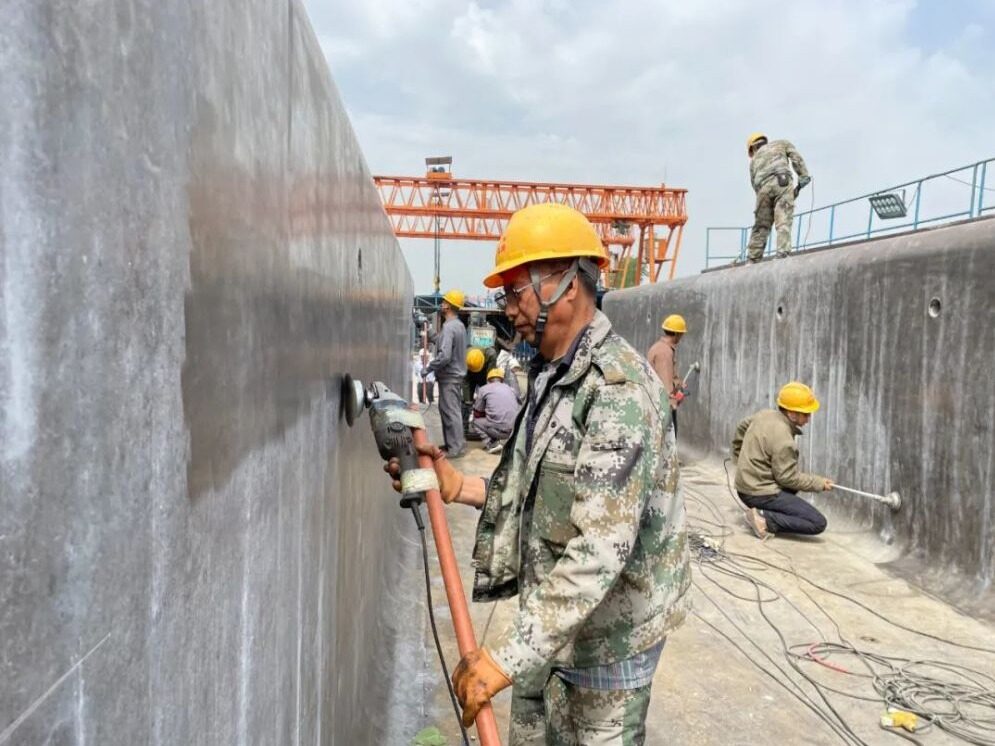 According to the project environmental assessment report, the detailed route of the Liuhe West to Nanjing North section of the Ninghuai High-speed Railway, the scale of each station, and the layout plan have been released. At present, the preliminary design documents of the project have been completed, and it is expected to start construction together with the North Yanjiang High-speed Railway before the end of the year. The total investment of the project is 19.5 billion yuan and the planned construction period is 4 years.

The new Nanjing-Huai’an Intercity Railway from Liuhe West to Nanjing North is all located in Nanjing, Jiangsu Province. The line starts from Liuhe West Station in Nanjing and goes southwest through Liuhe District, Jiangbei New District and Pukou District in Nanjing City, Jiangsu Province, and finally introduces the newly built Nanjing North Station, the total length of the main line is 38.696km, and the construction content includes the main line, the station, the moving line and the simultaneous implementation project. There are 2 stations on the whole line (Liuhe West Station and Nanjing North Station), and the total construction area of new houses on the whole line is 203,283 m2. The main lines are all bridge schemes with a length of 38.696km.

According to the "Letter from China Railway Economic Planning and Research Institute Co., Ltd. on Sending the Evaluation Report of the Feasibility Study of the New Nanjing-Huai'an Railway" (Jinggui Line Station Letter [2019] No. 286), Huai'an East Station ~ Huanglou Section can use Lianhuaiyang The operation of the town’s railway is not included in the evaluation scope;

The Shangyuanmen River Crossing Channel is currently in the engineering feasibility study stage and is listed as a key transportation project in Jiangsu Province in the planned start of 2022;

The section from Liuhe West Station (inclusive) to New Nanjing North Station (inclusive) is currently in the preliminary design stage. Considering that the route plan for this section of the Beiyanjiang Railway has been stabilized, combined with the preliminary design results, the target of this environmental impact assessment is finally determined to be the newly-built Nanjing-Huai'an Railway Liuhe West to Nanjing North Section.

The line starts from the newly-built Liuhe West Station. After exiting the station, the line continues to go southwest, crosses Chuhe, G2501 Nanjing Ring Expressway, G36 Expressway, Macha River in turn, and bypasses the agricultural reclamation area, and then enters and exits from the west to the east near the forest farm. Introduce the new Nanjing North Station with a length of 38.696km.

The site selection of Nanjing North Station has studied Longwangshan Station, Getang Station and Forestry Farm Station. Comprehensive analysis: Getang Station is far from the urban core area, and the urban transportation is inconvenient, and it cannot drive the development of Jiangbei New District. Resolutely oppose it and discard it; the Longwangshan station site project is a provincial investment project, and the project is less difficult to implement. After soliciting the opinions of Nanjing City, and combining the spirit of the "Memorandum of Cooperation between China Railway Group and Nanjing Municipal People's Government on Nanjing Railway Construction and Development", Nanjing North Railway Station The site plan of the forest farm was determined.

The Nanjing-Huai'an intercity railway finally uses the Shangyuanmen River Crossing Channel to connect to Nanjing Station. In order to minimize the running time between the train stations and ensure safe operation, the train must directly enter the Shangyuanmen River Crossing Channel after entering Nanjing North Station. , Instead of driving into the Shangyuanmen cross-river passage through the connecting line, the project of Nanjing North Railway Station's "West-in and East-out" plan is stable.

The Ninghuai Intercity and Shanghai-Chongqing-Chengdu high-speed rail stations are incorporated into Liuhe West Station. Except for the Shanghai-Chongqing-Chongqing high-speed rail main line project, the rest of the station works will be undertaken by this project. The Ninghuai intercity outsourcing introduces Liuhe West Station. The station scale is 4 stations and 10 lines (including Ninghuai and Shanghai-Yurong main lines), and the station flat slope is flat.

The effective length of the arrival and departure line meets 650m, with 2 intermediate platforms of 450m×12m×1.25m and 2 side platforms of 450m×8m×1.25m. The station building is located on the right side of the line's long mileage. Controlled by the slabs at both ends of the station (Chuhe on the south and Liuhe Vocational Technical College on the north), while taking into account that there are fewer cross-line trains in the direction of Hefei from Ninghuai to Shanghai-Chongqing-Chongqing high-speed rail (6 pairs in the future), the Shanghai end of the station The throat crossover vehicle uses the No. 18 turnout to pass. The throat crossover train at the Nanjing end of the station uses the No. 42 turnout to pass.

The newly-built Nanjing North Station is located in the direct management area of Jiangbei New District, Nanjing, east of the G40 Shanghai-Shaanxi Expressway, north of the 104 National Road (Pusi Road), and south of the Zhujiashan River. The design mileage of the station center is DK416+734.252 (the mileage of Shanghai-Chongqing-Rongjiang high-speed rail), and the station area is 100,000 square meters.

A new train station and a comprehensive maintenance work area are newly built on the southwest side of the throat area at the west end of the station. Editor/He Yuting